We talked to Jonathan in advance of the MR Studio 4.0 launch to discuss Arvizio’s unique place in the enterprise AR landscape. 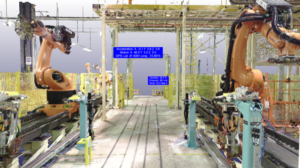 New AREA member Arvizio is in the news recently, having just released version 4.0 of its MR Studio platform. The Ottawa-based company is led by CEO Jonathan Reeves, who has founded several successful startups, including Mangrove Systems, Sirocco Systems, and Sahara Networks, as well as serving as an Operating Partner of Bessemer Venture Partners and Chairman of CloudLink.

AREA: Jonathan, you’ve had an impressive track record as a serial entrepreneur and venture capitalist. You’ve been involved in a variety of companies and other areas of IT. What motivated you back in 2016 to say, “Now is the right time for me to get into the Mixed Reality business”?

JONATHAN REEVES: That’s a great question. As you noted, I have started a number of companies over the years. When considering a new venture, I always tend to look at where the markets are going and which areas of technology look the most interesting, the most challenging, or where I think there is an opportunity for innovation. It became apparent to me and the other founders of Arvizio that Augmented and Mixed Reality technology were getting close to a point of inflection where the market would develop quite rapidly in a timeframe that suited us. That is, we are trying to extrapolate where we think the market will be a couple of years ahead when you start a technology company. Of course, things change along the way as the market develops and the dynamics become clear. We felt the combination of technologies, such as Microsoft HoloLens, the recently introduced Magic Leap and the evolution of ARCore from Google and ARKit from Apple, indicated a general movement towards immersive technology and the timing was interesting from an enterprise perspective. What we didn’t know at the time was just how rapidly 5G technology was going to enter into the mix. We are finding this to be an accelerant to the market. So, we’re rather pleased with the way the market is developing.

AREA: For our readers who are not familiar with Arvizio, can you tell us what distinguishes your company from its competitors?

JONATHAN REEVES: We believe there are several key AR challenges for the enterprise, particularly in the area of handling very large 3D models and point clouds – the type of data that’s often used in industries such as architecture, engineering, construction, energy, automotive and so forth. The 3D models that are used in these industries are much larger than the local rendering capability of most devices. We felt that addressing that problem would be of great interest – that is, the ability to take full-scale CAD models, BIM models using tools like Revit, Navisworks or using LiDAR scans, for example, and then bringing this data into Augmented and Mixed Reality experiences. We do not believe this has been well served in the market and something we feel presents a significant point of differentiation for us.

AREA: Do you plan to continue focusing exclusively on AEC, engineering, energy, and other large-scale enterprises?

JONATHAN REEVES: That has been our initial focus, but what we’re finding is there are other industries that also have similar problems. Specific types of manufacturing companies such as automotive, shipbuilding, and so forth have similar challenges because they’re also working with immense models. While we began with a focus in the aforementioned sectors, we are also finding the technology we’ve developed has relevance across industries.

AREA: Without naming any names, can you tell us about some of your customers and what they’re doing with MR Studio?

JONATHAN REEVES: A large, multinational top-10 AEC firm uses our platform extensively for visualization experiences in the presales or project pursuit phase. When a new building is to be visualized with a customer, they historically worked with Virtual Reality technology. But the downsides of VR are quite well understood. It’s not suitable for everybody, some people have motion sickness issues and it tends to be an insular, single person experience. We believe there are significant benefits for AR and Mixed Reality in the area of collaboration. They may wish to do a guided tour, as it were, of a new project, showing a customer or our customer’s customer how it’s going to appear, overlaid on the real world. We give them the ability to collaborate, share the experience with multiple users participating in the session, overlay the models on the real world and bring Mixed Reality and Augmented Reality’s benefits to the fore. In these scenarios, you may be doing immersive walk-throughs and design reviews, looking at features before they’re built – or in brownfield scenarios, overlaying renovations and enhancements onto an existing physical space. These are a few examples of what our customers are doing with the platform.

AREA: It’s impressive how built-out and robust your platform is for a company that’s only three years old. Can you tell us a little bit about some of the more significant capabilities you’ve been adding recently and how they benefit customers?

JONATHAN REEVES: Absolutely. We are in the process of releasing our 4.0 version of the platform. One of the key features of that release is hybrid rendering. That’s the ability to split the rendering between on-device – a HoloLens, Magic Leap or mobile device – and a backend GPU-based server, where we run our MR Studio Director platform. This essentially allows you to enter a high-definition mode. For instance, if you’re looking at a mobile device in a tabletop format in a conference room or onsite and you want to get a much higher level of detail associated with the model, you can enter hybrid mode and stream the results to the mobile device from a remote server. This allows you to get a 50 to 100x increase in the available resolution of the model that you’re going to render. Imagine you’re doing a walk-through of a building or visualizing a particular piece of complex machinery and then, you want a really high level of detail on a particular area. You can now achieve that in a seamless fashion.

This is actually being tested by a number of service providers as we speak. There’s a lot of interest in this mode of operation, running over 5G networks. Service providers such as Verizon, AT&T and Deutsche Telecom are working with us to test these capabilities and validate their operation over both existing LTE and future 5G networks.

In this scenario, latency become important. The ability to render models at high speed and the level of detail that you can achieve becomes significant. For example, point clouds, as used by many industries from LiDAR scanners or used in photogrammetry as a source data, can be hundreds of millions, or even billions of points. Typically, mobile device processors such as used in HoloLens or Magic Leap, on a tablet or mobile phone, are only able to render a few million points on the device. There’s an order of magnitude discrepancy between what can be handled on-device and the size of the model to be rendered. In this case, we use high-performance GPUs running on edge compute servers or in the cloud to render the high-resolution model and then stream that into the mobile device. This is a key new feature that we showed recently at the Augmented World Expo Show.

AREA: We spoke with Brian Vogelsang from Qualcomm a few weeks back and he was pointing out that same idea – that as we look to the future of AR technology, we will see more development activity devoted to dividing the computing burden between the device and computers at the network edge, figuring out where the work can best be done to deliver the best, fastest visualization and experience for the user.

JONATHAN REEVES: I think it’s an absolutely critical point and Brian is a good friend of ours. Qualcomm featured our software running on a combination of their 5G handset reference design and the glasses from nreal at Mobile World Congress in Barcelona a few months ago and we will also be part of their exhibit at the Enterprise Wearables Technology Summit in September. The ability to bring this kind of enterprise-class rendering and large model handling to these new 5G equipped headsets is of particular interest. The 5G work with Qualcomm and telecom providers is an important development in Augmented and Mixed Reality because this begins to shape the types of wireless connectivity that the headsets themselves will provide.

AREA: What is your sense of the state of Augmented Reality adoption and the pace of momentum behind it?

JONATHAN REEVES: I think that’s an interesting question that many in the industry are pondering. Several key things have happened in the last 12 months. First of all, the widespread adoption of ARKit and ARCore in mobile handsets has really opened the eyes of many to the benefits of Augmented Reality. We’re at a pivotal point.

Secondly, AR glasses are going through generational changes so we think it is important to have a cross-platform strategy. In discussing our solution with customers, they often tell us they’re not going to select just one platform and stick with it. It is an evolving market and we believe it is essential that users have a common or familiar experience when using a phone, a tablet, a HoloLens, a Magic Leap or new emerging glasses, like the nreal; this has been an important part of our strategy and we think this is extremely important for the evolution of the market.

We are also seeing some real changes there in terms of the tools that vendors like Unity are offering. Their AR Foundation is particularly helpful because it allows you to build a single application that can run on both ARKit and ARCore, for example. A lot of effort is spent to ensure the application we serve can be supported on multiple devices. In addition to that, we also believe that the arrival of Magic Leap in the market and the HoloLens 2 represent a new generation of technology with more capabilities. The spatial mapping is significantly more powerful than before. And we think these developments put the market at somewhat of a tipping point, where during the second half of 2019 and into 2020, we will see a rapid acceleration. I believe this is being demonstrated in the market as we speak.

AREA: Why did you join the AREA and what do you hope to gain through your membership? JONATHAN REEVES: We actually had been monitoring the AREA over the last couple years and watching the evolution of the organization with interest. We have seen an increasing number of partners that we’re working with joining the AREA and customers or prospective customers that are also joining. We felt this was a good time to join. And I must say, we’ve been very excited about the level of exposure it has already given us and we’re very pleased and excited to be part of it.