An opinion based article featured on Design News.com by Chris Wiltz explains how AR provider Magic Leap might be looking to secure a footing in the enterprise sector.  Should Magic Leap be focusing more on the enterprise and B2B market?

Depending on your level of enthusiasm, there was plenty to be either very excited or very cynical about during the opening keynote of Magic Leap’s first ever LEAP Developer Conference last week. On one hand, there was company CEO Rony Abovitz attempting to channel the spirit of Steve Jobs while portending a future for “spatial computing,” in which all mixed reality (MR) devices are connected in a vast IoT-like network called a “Verse” while developers enjoy Burning Man-like festivals geared around MR. There was also discussion of a commitment to build a diverse and inclusive developer landscape, with the company promising initiatives to attract female developers and developers of color. And if you’re into cute animals, you got to see noted science fiction author Neal Stephenson talk about virtual goats.

The article refers to a number of previous articles that have discussed Magic Leap’s journey so far.  On the application side, there hasn’t been much to get engineers or enterprise professionals excited. Most of the keynote focused on gaming, social, and entertainment applications.

However, the silver lining is that Magic Leap is beginning to finally demonstrate some potential for enterprise. While enterprise announcements made up perhaps 15 to 20 minutes of the over three-hour-long opening keynote, what was talked about points to a possible future for Magic Leap in offices and even factory floors.

The most promising announcement was a deal with Onshape—the creators of a cloud-based, multiplatform CAD system—that will bring Onshape’s CAD platform to Magic Leap. Speaking during the keynote, Jon Hirschtick, CEO and co-founder of Onshape, offered a brief glimpse of the technology. It was not made clear, however, if what was shown was an actual product demo or a proof of concept, as was the case with many Magic Leap demos, given how new the product is. “We’re ready to take a huge leap in the CAD era,” Hirschtick told the audience, later adding, “ …I truly believe mixed reality and CAD can improve the way every product on Earth is designed.” 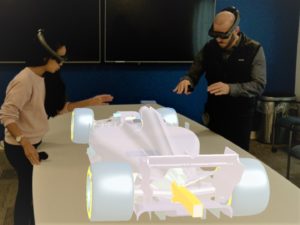