There was no need, as in past years, for me to go hunting for a few, well-hidden demonstrations. This year, 5G and AR were prominently featured as “two halves of a whole” in the booths of Verizon, T-Mobile, Orange, Huawei, Microsoft, Qualcomm and dozens of smaller exhibitors. These two concepts appear to be a match made in heaven. If the company promoting 5G in its MWC booth didn’t provide an AR display device directly, there were many display device partners and a tablet would do the trick.

Those companies promoting 5G are promising lower latency and higher bandwidth network performance to match the demands of today’s AR experiences and of those coming down the pike. Faster network connectivity isn’t the only 5G value proposition; after all, low latency networks need to connect the AR device to something useful. The options emphasize AI and IoT, in equal measures if possible. And, if an AR display device is found a little low in computational specs or the system architect wants to extend wearable device battery life, these networks are going to provide rapid access to portfolios of off-device computing resources.

For better or worse, those MWC attendees seeking first-hand AR experiences with (and without) 5G, IoT and AI had to wait their turn. The longest lines were for the opportunity to try on the brand-new Microsoft HoloLens 2, and nreal light devices (the latter shown in the expansive Hall 3 booth of Qualcomm, a new AREA member). PTC had a prime spot in the Microsoft booth where people could experience a Vuforia Studio solution with the latest HoloLens 2 features. Though less new to industry professionals, there was always a line of people waiting for Vuzix Blade demos. There was also strong traffic at the booths of other AREA members, including Iristick and FieldBit which were demonstrating enterprise AR solutions. 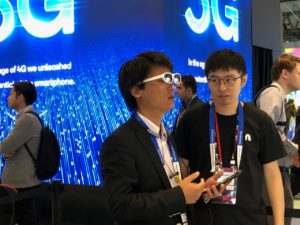 Compute Power to the Rescue

Many enterprise AR requirements identified in the AREA Statement of Needs have been difficult for display device manufacturers to meet without lower power consuming, smaller and higher performance (and more specialized) silicon. Since last year’s introduction of Qualcomm’s XR1, a new chip specifically designed for Mixed Reality, several companies have built products that leverage its features. Vuzix announced during MWC19 that its M-400 smart glasses would leverage the XR1.

As rumored a few months ago, HoloLens 2 is built on an earlier generation chip (the Snapdragon 850 SoC) combined with Microsoft’s own AI silicon. Although the new HoloLens will not have the architecture designed specifically for Mixed Reality (the XR1) or 5G (the Snapdragon 855), the move away from Intel’s Cherry Trail SoC for the CPU and GPU offers longer battery life and a wider FOV (up to 53 deg diagonal) while still bringing 4G LTE courtesy of Qualcomm’s X24 modem.

My short time with the HoloLens 2 helped me to witness three key improvements over the prior hardware:

Microsoft’s choice of MWC19 and its return to Hall 3 (from which it had been absent for years) for the launch of HoloLens 2 shows that it is serious about AR as the direction for mobile computing and new sources of revenue. While the focus of announcements was the HoloLens 2, the array of solutions that Microsoft has integrated (or announced that it plans to offer) to accompany HoloLens into the enterprise is impressive and demonstrates without doubt that it sees AR as key to employee productivity. 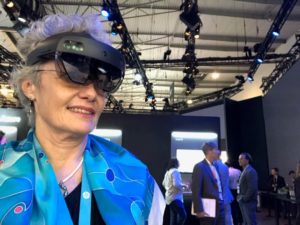 Christine testing the HoloLens2 in the Microsoft booth at MWC19

In addition to showcasing HoloLens 2 with third-party enterprise software from PTC, Bentley Systems and Pearson, the first public demonstrations of Microsoft Azure Spatial Anchors demonstrated how Azure will provide AR experiences equally well to Android and iOS as it does to Windows-based solutions. Azure Remote Rendering, designed to render high-quality 3D content in the cloud and stream it to edge devices, was announced but, unfortunately, not shown at MWC. In addition to Dynamics 365 Remote Assist and Dynamics 365 Layout (which were introduced for HoloLens in October 2018 and shown at MWC), Microsoft announced Dynamics 365 Guides on HoloLens and PC at MWC.

All these services, combined with the ability to use HoloLens 2 under contract (thereby avoiding capital expenditure), confirm the trend towards the company’s expanding its SaaS and Product as a Service (PaaS) portfolios for AR delivery.

Another important MWC announcement was the Trimble XR10 with HoloLens 2. Trimble, the first Microsoft partner to OEM the HoloLens 2 technology, showcased prototypes of its hard hat-mounted hardware and shared how they would integrate with their suite of mixed reality software and services for use in construction, architecture and engineering projects. 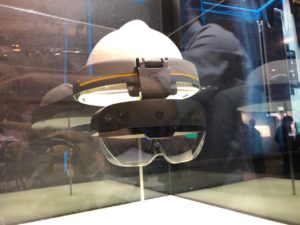 Trimble XR10 with HoloLens2 in the Microsoft booth at MWC19

The take home messages for everyone paying attention to the AR space are simple: enterprise customers are the target and, if the current devices or networks aren’t meeting all the requirements, 5G will become one of the principle means to addressing a wide range of shortfalls.

Aside from the excitement around HoloLens 2, there were many demonstrations of connected objects and spaces at MWC. There can be no doubt about IoT reaching a new level of maturity. Together with AI, IoT is really coming into its own to deliver customer value when combined with 5G to access better, faster delivery of AI from the edge or the cloud, if and when needed. The next phase, in which we are only now entering, is the integration of IoT and AI with AR.

Not to be dismissed, there were several other important demonstrations that caught my eye at MWC: Niantic Labs was showing a multiplayer AR game on a 5G network in T-Mobile booth that involved spatial mapping in the cloud (AR Cloud) on a small scale but still an impressive feat. Verizon put a demonstration of AR graphics on the outside of its booth and participated in a seminar about Cloud XR sponsored by Huawei, demonstrating it is working to deliver where it failed in the past (some might remember the Kopin Golden-i). And, finally, Orange had an AR-assisted holographic collaboration demo featuring the Magic Leap headset and Leap Motion sensors in its booth. 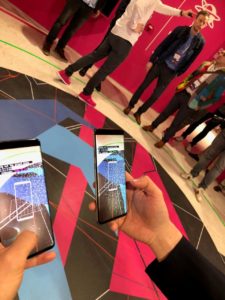 These were a few of the highlights that, together with all the excitement around the HoloLens 2, suggest there will be more developments to come, making 2019 a very good year for enterprise AR.

By Christine Perey, PEREY Research & Consulting, AREA Board member and chair of the AREA’s Membership and Research Committees.

Augmented Reality, and how it converges with IoT, AI, Cloud and Edge Computing technologies, was among the loudest and brightest themes of Mobile World Congress (MWC) Barcelona 2019.