As major technology firms race to roll out augmented reality products, Stanford researchers are learning how it affects people’s behavior – in both the physical world and a digitally enhanced one.  Article author Alex Shashkevick.

In a new study led by Jeremy Bailenson, a professor of communication in the School of Humanities and Sciences, researchers found that after people had an experience in augmented reality (AR) – simulated by wearing goggles that layer computer-generated content onto real-world environments – their interactions in their physical world changed as well, even with the AR device removed. For example, people avoided sitting on a chair they had just seen a virtual person sit on. Researchers also found that participants appeared to be influenced by the presence of a virtual person in a similar way they would be if a real person were next to them. These findings are set to publish May 14 in PLOS ONE.

To examine how AR affected the way people behaved in social situations, researchers recruited 218 participants and conducted three studies. In the first two experiments, each participant interacted with a virtual avatar named Chris who would sit on a real chair in front of them.

The first study replicated a traditional psychology finding known as social inhibition. Just as people complete easy tasks with ease and struggle with more challenging ones when they have a person watching them in the real world, the same held true when an avatar was watching study participants in augmented reality, the researchers found.

Study participants completed easy anagrams faster but performed poorly on the complex ones when avatar Chris was visible in their AR field of vision.

“The fact that not a single one of the subjects with headsets took the seat where the avatar sat was a bit of a surprise,” Bailenson said. “These results highlight how AR content integrates with your physical space, affecting the way you interact with it. The presence of AR content also appears to linger after the goggles are taken off.”

In the third study, researchers examined how AR affects the social connection between two people who are having a conversation while one of them wears an AR headset. Researchers found that those wearing AR goggles reported feeling less socially connected to their conversation partner.

Bailenson said that additional studies, which he and his team are now working on, are needed to further examine the effects of augmented reality.

The AREA has a Research Committee specifically addressing challenges faced by the Enterprise AR industry. 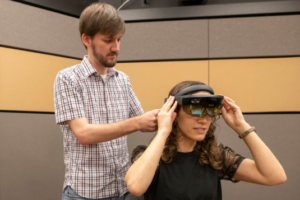