The American Society of Mechanical Engineers (ASME) has a 141-year history promoting the art, science, and practice of multidisciplinary engineering and allied sciences around the globe. With 90,000+ members located in 135+ countries around the world, ASME has embarked on a Digital Engineering Initiative that includes a growing interest in enterprise AR. We spent an afternoon recently talking about ASME and its work with Christine Reilley, Senior Director of Strategy and Innovation, and Christian Sanna, ASME’s Senior Director of Standards Operations. 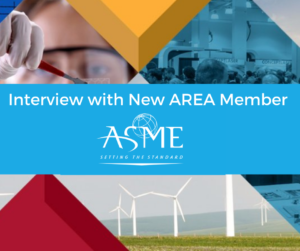 AREA: For our readers who aren’t familiar with ASME, could you tell us about its mission?

Sanna: Our work as a standards developer started during the Industrial Revolution with boilers. Nowadays, we’ve branched out into a multitude of technologies and processes, such as verification and validation, big data, additive manufacturing/3D printing, medical devices, robotics, and much more. We’re accredited as a standards developer by the American National Standards Institute. Our real core competency is finding the need that exists in global industry or in research, finding the subject matter experts and the organizations with a grounded interest in that technology or the subject matter, convening them and applying a process to make sure that all points of view are considered so we can achieve consensus. I should also point out we’ve often pushed back against overemphasis of the letter “A” in our name because we don’t have borders, per se. Our committees that write and update standards for us and find new areas for standardization are populated by people from the four corners of the Earth.

AREA: How did ASME’s interest in Augmented Reality come about?

Sanna: I would add that, from the standards perspective, we have an immediate need for our standards to adapt to new disciplines and new applications. For example, we have standards and a constituency that deal with oil and gas, for example, which includes remote inspection. Even though the technology around industrial piping systems and pressurized tanks is very well established and mature, the inspection and maintenance applications are continuing to progress. Hence our standards initiatives on remote inspection, a subject which, by the way, we’ll be hosting a virtual event about on December 8 and 9. But then we also have newer activities and standards, like mobile unmanned systems and remote-control hydraulic platforms with transport capabilities.

AREA: In terms of AR standards development, are you still in the early stages?

Sanna: We’re just getting started in exploring how to apply AR and remote concepts to our existing activities. The bigger question is for us to determine the state of the AR ecosystem. Is there a lack of consensus that could be ameliorated with some standardization or at least getting everyone on the same page? We’re very much in a learning process and trying to get steeped in what the AREA’s constituents are doing, what they want, what they’ve achieved so far.

AREA: Since AR does touch a lot of different areas, as you’ve already mentioned, how does ASME work with other organizations that might also be involved in working on interoperability and standards?

Sanna: There are occasions where we set out on a path of developing a joint standard, thus we have relationships with other standards developers on a technical level, such as the American Concrete Institute and the American Nuclear Society, to name a few. We also have relationships in which representatives from groups like the Canadian Standards Association and the Japan Society of Mechanical Engineers sit on our committees. This ensures that when these organizations write something, they don’t go off in a completely different direction than us and the global industry can move forward.

Reilley: To give you another example, we’re also conducting an activity in regenerative medicine surrounding tissue-engineered medical products, or TEMPs. We are working with the Standards Coordinating Body, the SCB, which is under the auspices of the FDA and NIST, the National Institute of Standards and Technology. ASME is working on standardizing the hardware for bioprinting technologies, IEEE is working on a standard for the electrical systems for bioprinting technologies, and ASTM is working on what are called bioinks for the actual cells that are being 3D-printed. So, again, we’re making sure that our efforts are complementary in this consortium.

AREA: ASME has already jumped into AREA activities by hosting the recent Digital Twin Summit. But tell us more about what you hope to get out of your AREA membership and what we can expect from ASME’s participation in the AREA.

Reilley: A large part of this is an education for ASME. We really want to connect with those in the enterprise AR industry to understand the needs and the gaps and learn how ASME can make a positive impact by lending our core competencies to the effort. We also are looking to expand our network and extend the opportunity for AREA members to collaborate on ASME event programming, webinars, and other content.

Sanna: We can also help the AREA to convene subject matter experts and thought leaders to get guidance out on the street fast, knowing that it reflects the consensus of the industry. That’s something we’re very good at. Our own constituents can also benefit through our interaction. We’re looking at how we can introduce our ASME members to the AREA so they can network, discover the state of the art and the benchmarks for various applications. We’re casting a wide net and it’s going to take us a bit of time, but we want to get the right ASME people plugged into the AREA activities that really move the needle for us.

Reilley: I wanted to add that our strength at ASME is our dedicated infrastructure for developing standards. We have degreed engineers on staff and it’s their role to manage committees and volunteers to get standards through the approval process. It’s something that we pride ourselves on, and a way that we can offer the AREA real value.